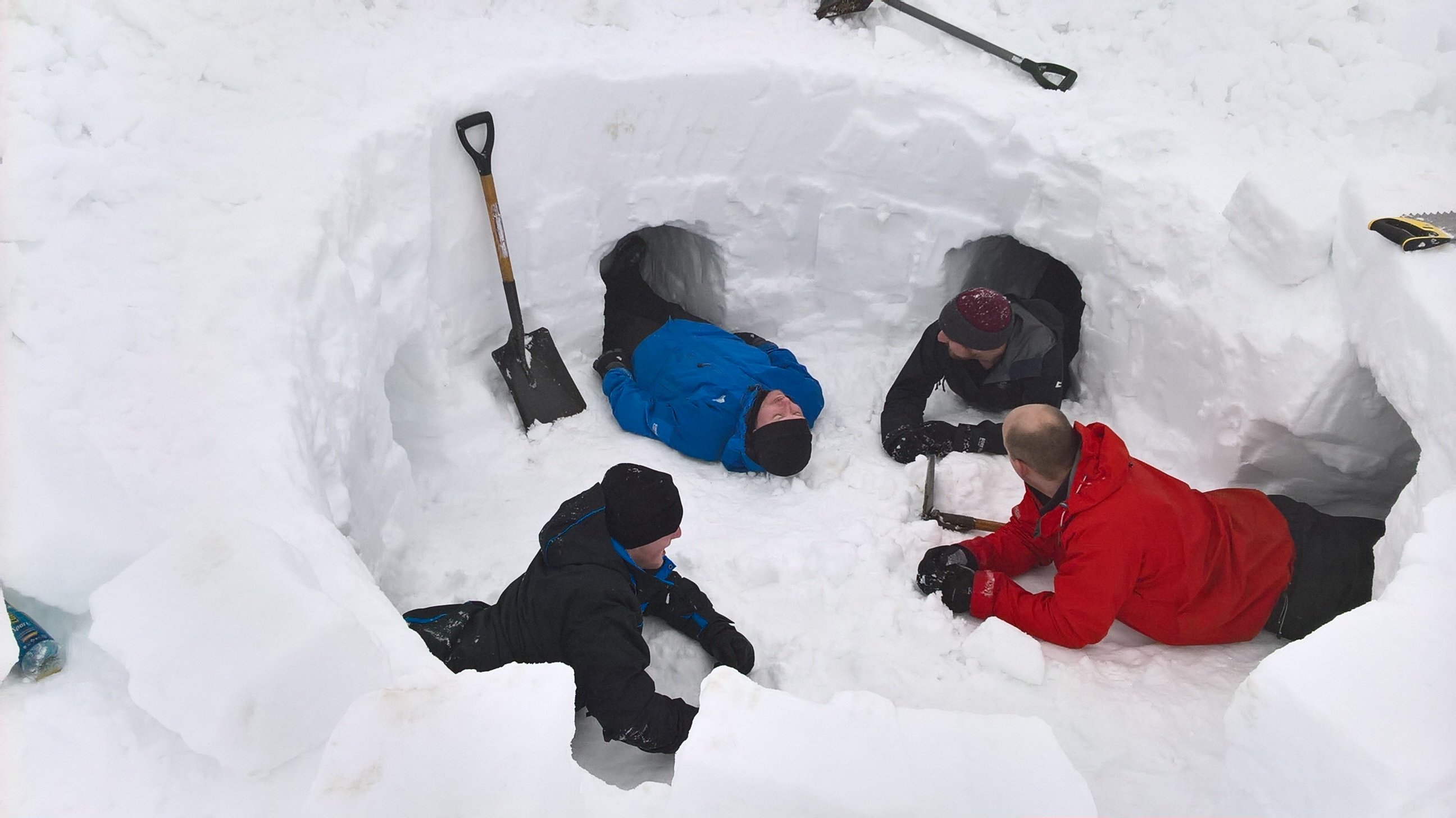 For over 37 years Labman Automation has prided itself on building state of the art custom robotic systems but what many people don’t know is that Labman has also been at the cutting edge of igloo design and building for the past three years! Now, when people think igloo they think Inuits and the Arctic. What a lot of people don’t realise is that you can actually build an igloo in the UK and, if you are brave enough, use this igloo to shelter you from the elements and provide you with a safe and warm place to sleep. I must admit that I never believed the latter. At least not until I was party to the third Labman Iglooing Expedition!
I am actually one of the surviving few at Labman who have attempted the Igloo dream three times now. Some of you may remember the first attempt (www.labman.co.uk/tag/igloo/) sadly an unsuccessful attempt due to the merciless Scottish elements! No-one, however, will know of the second Igloo attempt. An occasion when five of us successfully built and slept in two igloos (a 3 man and a 2 man) up in the Cairngorm Mountains of Scotland. This trip was never reported on the Labman blog. Likely down to the shell shocked condition of those who attempted it, unable to re-live the horrific memories of igloo walls peppered with holes and gusts of snow and ice tickling our nostrils at 1am! In fact it was a wonder I was able to be convinced to venture up to Scotland again.
Nonetheless, we were once again able to recruit a group of us to attempt the expedition, myself (Tom Smith), Ian Riley (another die hard Igloo veteran), Sam Bright (fellow survivor of Igloo expedition 2), Jamie Marsay (a rookie in the Igloo world) and Jonathan Challenor (rookie number 2). We all packed our bags and set off after lunch on Friday 4th March 2016! The long drive up to Scotland was spent reminiscing past expeditions in an attempt to strike fear into the hearts of our rookie team members. Needless to say we were all prepared for the worst. This could be seen by the ratio of food to booze in our pre-iglooing shopping trip.
We landed safely at Glenmore Lodge Youth Hostel with the snow falling steadily around us just after 8:30pm and just in time for tea! A hearty meal was laid out by our hosts at the hostel and talk quickly turned to our Igloo building strategies. With the lack of any CAD software to sketch up our plans and no FEA to test our theories we had to resort to freehand sketches on the back of a napkin. The hot topic for discussion was the decision between a 2 and a 3 man igloo or an ambitious 5 manner. Fellow Igloo builders may know that there is a trade-off between igloo strength and diameter. A relationship we soon derived as we threw around some design ideas. Bound by this empirical law of igloo building our hopes for a 5 man monster igloo seemed very distant, at least until we stumbled upon an idea…..
If we designed our igloo around a central communal circle which was of optimum diameter to satisfy the laws of igloo building then tunnelled five sleeping compartments radially out from the centre like spokes on a bike wheel we would all be able to fit comfortably inside! It was a risky strategy! We would be going ‘all in’ on an untested igloo design which, if it failed, would render us without time or option but to retreat to the car, if unsuccessful. Nonetheless, the draw of pushing the boundaries of Igloo architecture was too much to resist. We sketched out our final plan and retreated to our room for a final gear check before bed. With our ice axes, crampons, bivi bags, head torches, cooking stoves, concrete saws, shovels and Jamie’s steri pen all packed, we were finally ready for an early morning start!
Awaking to a heavy snow fall we quickly had breakfast and packed the car up ready to drive the last couple of miles to the Cairngorm ski centre. We set off, spirits high only to be quickly thwarted as we found the road to the centre was closed whilst they cleared the snow. Frustrated, we had no choice but to wait patiently. Finally, the road opened and we made it up. Quickly we disbanded from the car, donned our winter coats and waterproofs then headed off on our hike up the mountain side. Deep fresh snow (over a meter in places) made the going tough, especially for the shorter legged members of the team – Jamie certainly struggled, possibly under the added weight of his steri pen, but we soldiered on and made it up to our chosen igloo site just before 11am. The snow was fantastic! Over 2.5m deep in places, perfect for igloo building! Unable to restrain Sam at the sight of the snow we quickly got to work.

Igloo building starts by digging out a foundation circle down into the snow then building the roof above ground over the top of the foundations. The roof itself is built using large blocks (approx. 0.3 x 0.3 x 0.5m) which are cut from the hard packed snow using our concrete saws. The blocks are laid in a spiral around the central foundations slowly angling in to the centre to form the roof. Our ambitious design required us to first tunnel the five sleeping compartments into the side walls of the central foundations. We all pitched in and soon our foundations were complete!

We were ready to start blocking up the roof. Sam and Jonathon got to work establishing a block quarry to provide our building materials whilst Ian, Jamie and I started building the igloo roof. Through fantastic organisation and teamwork our igloo soon started to take shape.

Late in the afternoon as the quarry grew bigger and bigger into the Scottish hillside we placed the last few blocks on the igloo roof. We had been successful in our ambitions. Aided by freezing temperatures the Igloo set solid allowing us to actually stand on the roof without fear of it breaking. After some finessing of the build, adding a luxurious porchway and packing a covering of snow onto the outer walls, the Igloo was complete before 5pm. 6hrs build time and 30 man hrs in total we even had time to build an Igloo latrine in the depths of our quarry! It was the most successful Igloo expedition yet!

As the sun went down and after some ‘survival bag sledging’ we established camp inside the Igloo. Weary from the days adventures we settled into our sleeping bags and started cooking up a feast of tinned meat.

As we finished our tea we were alarmed to find dripping from the roof of the Igloo! With all five of us inside we were melting. A quick temperature reading (11.5°C) and frequency check on the drip led us to the conclusion that we needed to add ventilation….fast! We had been worried that this may happen and had brought in a spade just in case, we held up a tarpaulin to catch the snow and Ian cut an 8” hole in the centre of the roof. Within seconds the temperature dropped down to 2.5°C and the dripping slowed to a stop. We were saved and settled down to our bottle of whisky before bed.

Awaking in the morning around 6am I was happy to find that we and our igloo had survived through the night. We had done it! No 1am holes in the walls, no intrusive blizzards. This had certainly been the most comfortable Iglooing experience possible. We packed up our gear and headed down the mountain in search of a cafe and a well-earned full English!