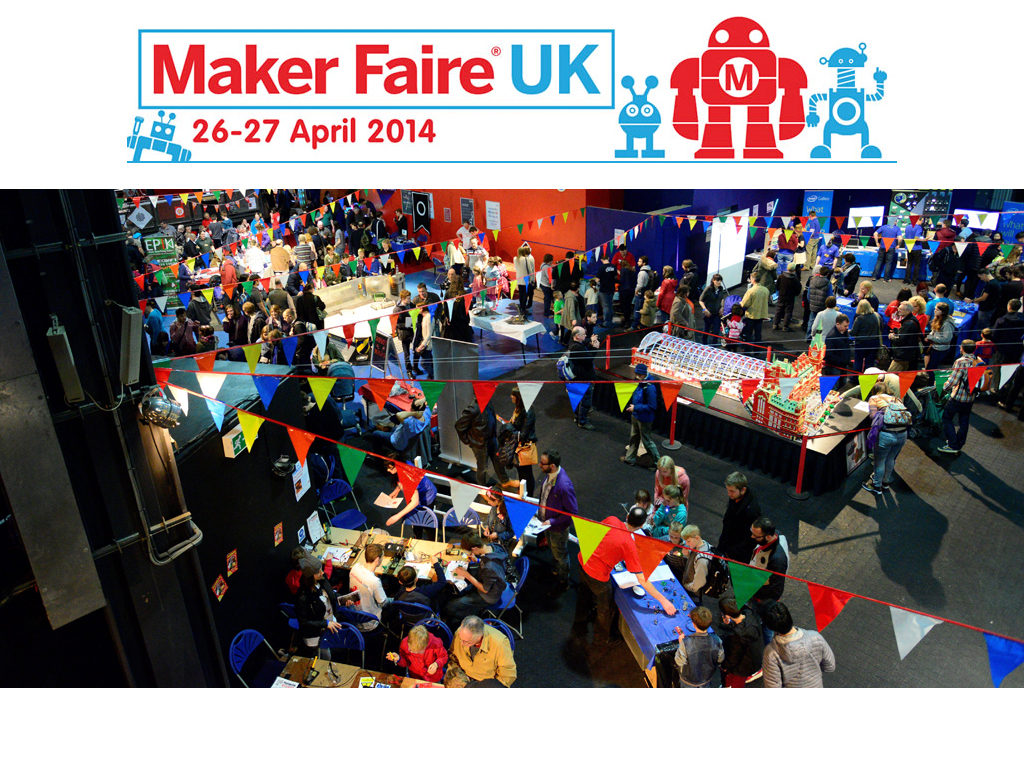 On Sunday some enthusiastic makers and tinkers of the Labman team paid a visit to the Newcastle Maker Faire. The day started off grey and wet so we were really hoping for a good event to lift our spirits.

After the short travel to Newcastle from our base in Seamer we arrived at the life centre, which hosted the event and were immediately greeted by a 10m high recycle bin robot. It was clear that it was going to be awesome.

The venue provided 5 main event areas, split into various fun and creative sections. The overwhelming array of activities and displays made it difficult to decide what to see first. Early in the event we met some interesting Germans who manufactured GPIO breakout boards for the Raspberry Pi and manufactured a very nice 2.8” TFT screen and case combo.

Other makers had some very cool gadgets like the wooden mechanical cogwheel clock and a very inspired knock on box clock, which provides the time by knocking back the time to you, two knocks equals 2 o’clock.

Something of particular interest to us was a maker who had a Charlieplexed LED cube with some very intricate and impressive light patterns. There were also lots of sound based stalls, a particularly cool one was a stall, which used the electrical energy of the body to transfer signals through vegetables, and other inanimate objects to create sound.

After a quick bite to eat we met up with a guy who made a ”Free Jazz” robot. It used a webcam to view a glitter lamp and used recognition software to fire Jazz instrument .wav files when the glitter hit key areas of the screen. The result was very impressive but not easy on the ears, which is why it was free, he said!

There was chance to play on a lot of musical based inventions. Also some classic geeky ones like the Theremin, this was fun to play but no one was close to reproducing the Star Trek theme tune.

• Etch a Sketch Laser cutter, which was great fun to use, it used an etch-a-sketch style control and fired a laser as the axis moved.
• World’s most useless box. A simple wooden box with a switch, when you press the switch a robot finger pops out and turns it off again.
• Kinect operated pigeon flying game used to fly like a pigeon over buildings where flapping your wings/arms gained height and speed.
• Retro gaming – This section was abundant with classic PC’s and consoles such as the ZX Spectrum, Apple 2, SNES and Amiga etc.
• Intel Galileo Development board – A wireless I/O board that can be used to control multiple devices in real-time using a drag and drop web interface.
• Thermal imaging cameras that projected your heat signatures on a wall

We couldn’t go all day without buying something so it was off to the trader stalls for some electrical bits and bobs. Some of us topped up on simple cables and components. We did also manage to buy a DIY Arduino kit for just £7 from the inspiring makers at www.shrimping.it who offer the kits to teach others about Arduino and electronics.

Shortly after our shopping spree we met Agnes a custom built knitting robot that made scarfs, which the makers sold. She was very impressive knitting away but would stop every now and then to have a look at her spectators. Despite the achievement we couldn’t help think it was a little eerie.

Now the Rain had disappeared we braved out in the cold to the “Big” makers outside. There was a fire-breathing dragon, ride on mechanical horse, kids wacky airship style rides and a big diwheel or dicycle, this was extremely impressive and looked like a great way to travel.

We headed to the Noisy Maker tent, which was absolutely brilliant, certainly a highlight for the event. These guys used old computer, Hi-Fi and house hold equipment to make loud sounds. Hard drive connected to base speakers, pots and pan drums, motherboard parts and a lot more all made for a fun and musical time.

Possibly the most amazing part of this was a corn flour and water speaker. This non-Newtonian fluid goes from a liquid to a solid under tension from the speaker movement. This naturally was controlled by a hard drive platter, which increased the frequency as it span. The faster the better!

A giant turtle (not a tortoise) and recycle robot played music and drove round the event marquee causing quite a spectacle. The dancing lady on the turtle was a particular favourite with the group and despite the cold weather got everyone joining in the activities and having a good time.

As the day drew to a close the last showing of the Robohand was the big finale to the event. A giant hand which crushed scrap metal, washing machines, fridges and for the encore a car! This impressive show saw 2 men in the car and the Robohand scrape, smash and crush the car around them until they finally escaped!

This was a prefect way to the end the day and after seeing all the inspiring inventions, creations and crazy gadgets just makes the engineers at Labman want to get back to doing the same. An excellent day out and we can’t wait till the next one.

For videos please check out the following youtube links: