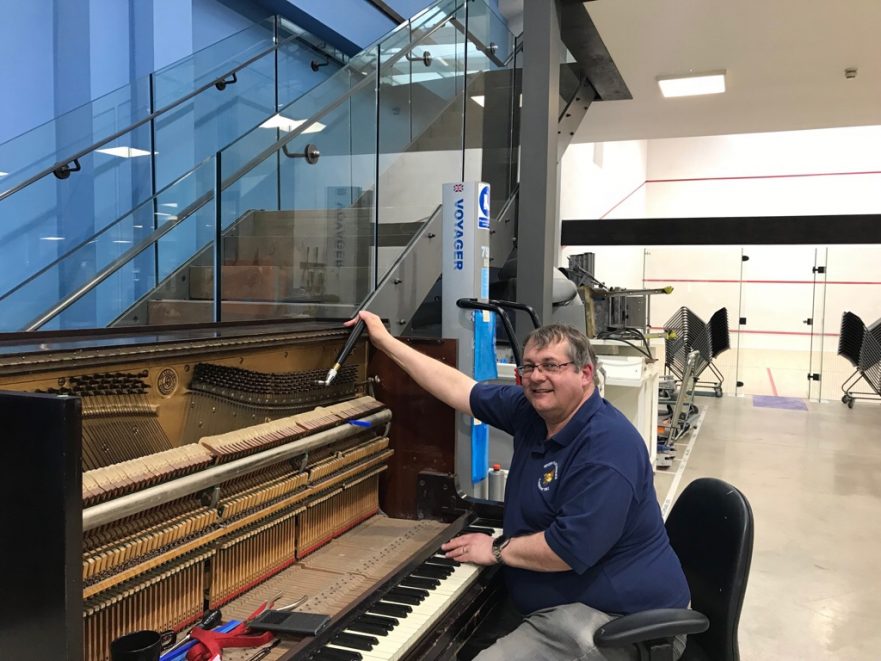 Some time ago Labman acquired a piano, and since then it had been sitting neglected in a corner, longing to be played; something had to be done.

About a month ago we had a young man come in for some work experience, and while he was here, he played the piano every lunchtime. It would have been lovely to listen to if the piano had been in tune! Almost every note was either sharp or flat, some notes stayed pressed down after you played them, and the piano was generally in a very bad way.

It was decided that the piano needed some life and character again – we called Alex Fender, the piano tuner (he doesn’t do guitars).

His resume was impressive to say the least: he was the senior technician at Bosendorfer pianos in London and has worked with many great pianists, including John Lill, Piers Lane, and Ingrid Surgenor; our piano was in good hands.

He came in on a late, sunny Thursday afternoon and got cracking on our piano. Amazingly he did not use any technology whatsoever to tune the piano – he did it all by ear! He would repeatedly play a note while tweaking its three designated strings to get the perfect resonance and pitch and he would occasionally play a quick tune to test it out. This process quickly became quite annoying for the staff on the nearby desks, but it was worth it in the end – the piano was restored to its former, tuneful, glory.

Alex also looked at the serial number and established that our piano was manufactured in 1931. For an 88 years old piano, it was no surprise that it was so out of tune!

Having the piano tuned revealed a number of hidden musical talents within Labman: we were immediately serenaded beautifully for an hour by Nils Aldeborgh, a year-in-industry student from the US. It was lovely to hear the piano playing through the factory, and made a welcome change to the hissing and clunking of pneumatic cylinders and motorised axes.

The Labman band, Robbie & The Near Misses, who debuted last year at Labfiesta, our annual summer party, have been starting their rehearsals for this year’s Labfest. The musical scene is strong at Labman.